Sometime in January this year, I entered a contest conducted by ProfileSurfer, a blog which devotes itself solely to the number one social networking site in Southeast Asia, Friendster where I have been maintaining an account since 2004.

A couple of weeks after that, I got an email from Jane, the blog owner informing me that among the many who joined her contest by submitting their Friendster accounts, I was declared the winner, and the award for that is an original Friendster Shirt, straight from the Friendster office in the US! Read the story here . 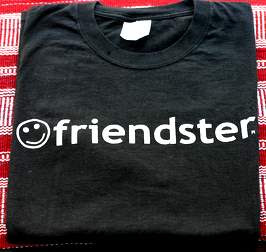 Yesterday, exactly 3 weeks after she mailed the shirt from her location in Daly City, California, I finally received the shirt which was in my favorite color – Black and at my current measurement – Large (American Size). Yes!

Friends, behold my first-ever PRIZE from the Internet….. (which Jane valued at US$25 based on the receipt from the United States Postal Service excluding delivery charges of course). Wow!