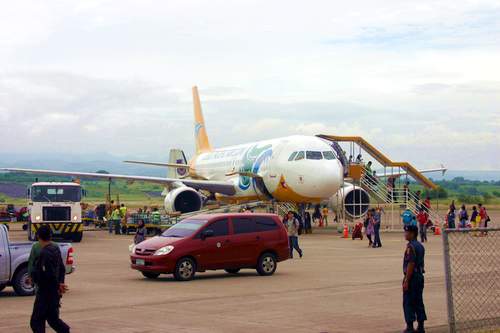 A Cebu Pacific plane which just arrived at the GenSan International Airport.  Notice the cars?  Those are for the greeters of Pres. GMA when she visited the Tuna Capital last week.

According to Cebu Pacific’s press release:

Cebu Pacific is adding frequencies to its services from Manila to Bacolod, Tacloban, Cotabato, and Dipolog.

The airline will also expand its route network from Cebu with the launch of its direct Cebu-General Santos (GenSan) service starting 15-Aug-08.

CEB introduces the additional frequencies and announces its Cebu-GenSan operations with a seat sale which will run from 24-Jul-08 to 29-Jul-08. (Gosh! Tapos na! – BARILES) This is valid for travel from 15-Aug-08 to 30-Nov-08.

One-way fares to Bacolod, Tacloban and Cebu-GenSan is at PHP999 ‘all-in’ while fares to Cotabato and Dipolog is at PHP1,499 ‘all-in’.

Candice Iyog, CEB spokesman said, “We will continue to expand our operations and offer the lowest ‘all-inclusive’ fares especially to new CEB routes that have not been previously exposed to our low fares.”

The three-times weekly Cebu-GenSan service will operate every Monday, Wednesday, and Friday. The flight departs from Cebu at 10:30am and arrives in GenSan at 11:30am. It leaves GenSan at 12:00nn and arrives back in Cebu at 1:10pm.

So that makes it SIX FLIGHTS out of GenSan International Airport, 3x weekly. TODO NA ITO!

With that, am encouraging everyone from CEBU to book you tickets now and be here for the TUNA FESTIVAL which runs from August 29 to September 5, 2008!