The Holy Week for Christians is one of the best times to reflect on the life, passion and death of Jesus Christ.  Here is the Philippines, especially in Luzon, one of the traditions which has been passed on through generations, aside from the Visita Iglesia, is the PABASA, which is a Tagalog term, loosely translated as a “Reading Event”.

It is a Lenten practice of recitation (by chanting or singing) the story of the Savior rendered like an epic poem (ala Florante at Laura) contained in a book called “Pasyon“.

Volunteers simultaneously SING the PASYON non-stop while seated in front of a lit-up altar of the Holy Family, Jesus, Mary and St. Joseph.  For these chanters, joining this reading/chanting marathon is one way of sacrifice or atonement for all their past sins. 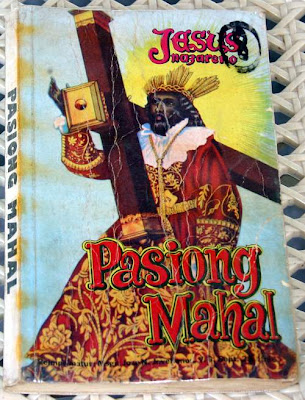 Here in GenSan, the association of Kapampangans, called Aguman Capampangan, people who have roots in Pampango-speaking provinces in Luzon, spearhead this annual activity, beginning in Holy Wednesday and lasting until Black Saturday.

For this year, the PABASA will be held once again at the old NANA BETH’S Compound, along Yumang Street, a few meters away from St. Michael on April 20 to 22, 2011.

GenSan News Online Mag is therefore inviting all its readers who would want to experience this old tradition handed down through the generations to drop by this year’s PABASA 2011, before or after your VISITA IGLESIA.  Bring your family and friends and try to volunteer as readers together, an act which just might give you the indulgence you need this Holy Week.

Pampango delicacies will be served to volunteers and visitors of the PABASA 2011.  Best time to go there is in the afternoon when there will be less crowds, according to banker/blogger Orman Manansala, the President of the Aguman Capampangan Socsargen.

Below is the Google Map of Yumang Street.
View Larger Map