Congratulations to the Rotary Club of General Santos City for their GOLDEN ANNIVERSARY tomorrow!!!!

Considered as the ‘mother club’ of all the other rotary groups in Soccsksargen, Rotary Club 17116 of Zone 3A under District 3860 was chartered to the Rotary International, on March 3, 1958 (Gosh! Was not even born yet.). 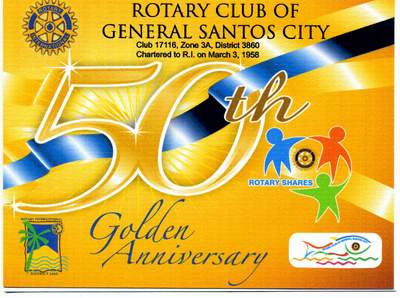 I am posting this to honor their president, Mr. Bing Royeca and his fabulous wife, Armi Magtoto-Royeca (owners of Rolee Bakeshop) who are bosom friends of mine and undeniably, one of the most good-looking couples in GenSan.

Bing, by the way, is a cousin of Milagros Royeca who was featured here in an earlier article and whose father, the former Mayor Jorge Royeca is Rotary GenSan’s first-ever president!!

Lately, they have been quite hard to reach these past weeks due to their hectic preparations for their BIG PARTY tomorrow night at the Family Country Hotel & Convention Centre incidentally owned by their fellow Rotarian (and my baptismal godfather) Rey Golingan.

Cheers to you Bing and to your club and may the commitment to share and to serve be always with you! Mabuhay kayo!!!!