Even though I did not buy a single thing, I had fun at last night’s Midnight Sale at the KCC Mall of Gensan just people-watching. 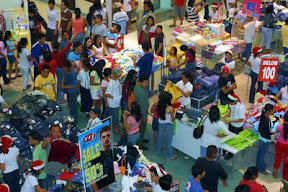 This quarterly gimmick of Gensan’s largest mall seem to gather the most number of people from all corners of the Socsksargen Area enticed not so much by the promise of sales discounts of up to 80% but by the chance to watch for FREE a concert by Manila’s “teen stars” of the moment.

Last night was no different. Featured performers were ABS-CBN’s Pinoy Big Brother’s latest evictees, Victor Basa and Megan Young who were to perform at the mall’s sparklingly new Convention Hall which appeared ready to burst at the seams with a mostly young, very excited crowd who have been there since 7pm. Good thing, MOR DJ’s Mario Valentino, Cheenie and Joey C kept them occupied with some inane games and so-so performances by a local dance group. 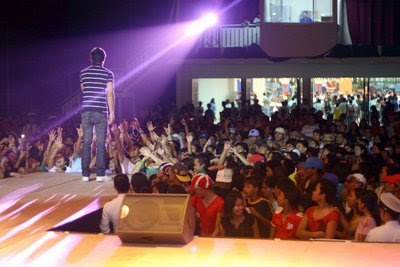 At half past 10, all hell broke loose when the two artista’s came out, one after the other, the 17-year old 5’8 tall stunner Megan first, followed by the seemingly amazed “hunkish” Victor. It was obvious however the instance they opened their mouths to sing that they were just hired for the “kilig factor”, mangling their songs all the way. But did the crowd mind? Not by the hair of their chinny-chin-chin….no-no. They lapped it all up with glee, astonished at the presence of their “TV idolos” before them. Kuya’s boarders never had it so good.

And from where I stood, up in the director’s booth fronting the stage, is the sight down below of a sea of twinkling nokia’s, motorola’s and sony ericcson’s from numerous hands trying to video or shoot pictures of the two.

At the bargain area at the atrium outside the convention hall, there was still a steady stream of people coming in, some in their pajamas all ready for bed and some in their sunday’s finery apparently coming from their office christmas parties, rushing in to dig into the piles and piles of discounted clothing merchandise, scouting for the best buys, unmindful of the drained and sleepy salesclerks who were (am sure) trying their best not to dive into the inviting soft and fluffy displays. And, from the looks of it, it was still gonna be a long, long night for the workers and staff of the mall and its tenants.