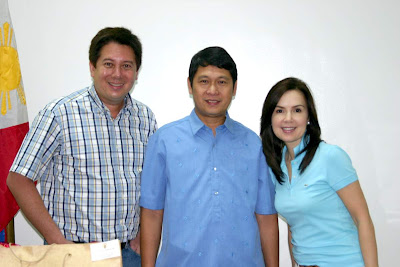 Cristina Gonzales-Romualdez has been away from showbiz for quite sometime now ever since she got hitched to former Congressman and now Tacloban City Mayor Alfred Romualdez, nephew of Imelda Marcos but she still can’t escape the gleeful shrieks of fans and admirers everywhere she goes.

Last week, the former sex siren of the 80s (now councilor of Tacloban) and her husband were at the Tuna Capital to meet up with the city officials and invite them to their Pagsangyaw Festival slated on the last two days of June.

While they were waiting for GenSan Mayor Jun Acharon at his newly-renovated office, I had the chance to engage them in small talk and inform them that my mom is also a Waray, having hailed from Guiuan, Samar. This gave me the balls later to ask permission to have my picture taken with the former sex goddess of the Philippine cinema.

At 42, Ma’am Cristina (as her staff calls her) doesn’t look a day older than the time when she was the most in-demand leading lady of action stars. Although blessed already with two kids, six-year old Sophia and 5-year old Diana, she can still give today’s sexy actresses a run for their money.

While looking at her, I couldn’t help but think that she must be the original Flawless Queen because of her milky-white complexion. With only minimal make-up, she still looked fresh despite the fact that their group just came from a city tour with the councilors.

But what made her even more striking is her calm demeanor during the ensuing conversation between her husband and Mayor Acharon which lasted almost an hour. I noticed that she was not only playing the role of a supportive and attentive mayor’s wife to the hilt but also that of a city councilor, complementing her husband’s sales spiel on the merits of their patronal fiesta next month, throwing in bits and pieces of additional info herself.

She is definitely her husband’s secret weapon!

After the courtesy call, the Tacloban couple proceeded to the city hall lobby. There, they were swarmed by camera-toting government employees who have been waiting for over an hour for a chance to catch a glimpse of one of Philippine cinema’s most beautiful faces and probably have their pictures taken with her.

At this point, the mayor of Tacloban gallantly stepped aside and gave her the spotlight. In his hometown in Tacloban, he maybe the King but elsewhere in the Philippines, including General Santos City, only his wife, Cristina matters to throngs of ordinary movie-going folks, very much like these star-strucked “generals” before them. 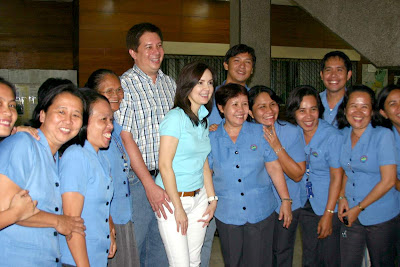