After a show-stopping opening number interrupted momentarily by rain, the Pageant Night for the Search for the Lakandula & Lakambini 2008 (the real deal this time) went on without a hitch last night (Feb 23) at the Oval Plaza Stage.

Eight lovely ladies (the prettiest batch i’ve seen) and eight young hunks showed their stuff to prove that they have what it takes to bring home the Kalilangan Festival‘s most prestigious beauty and talents search titles. 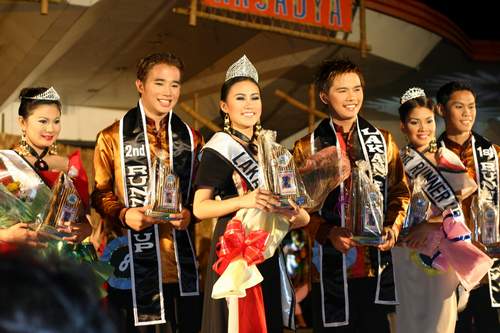 The affair finished around midnight which did not give me a chance to watch either the Aiza Seguerra Concert at the Lagao Gymm or the HALE Streetparty at East Asia Royale Hotel where sexy girl-group Mocha & performed last year and the Browman Revival the previous day. Instead, to cap the night, I had noodle soup with my brother & event manager Orman’s staff at the Kalilangan Coffee Shop of East Asia where we stayed until my eyes could barely open themselves and my mind was flying elsewhere.

By the way, earlier that night, someone pointed out to me the reigning Binibining Masayahin 2008 (Ms. Gay 2008) among the people at the backstage. Sans make-up & wearing only a casual get-up, she was, I guess, still pretty and carried it like the beauty title holder that she is. 🙂