In a mailed letter addressed to GenSan City Mayor Jun Acharon, Makati Mayor Jejomar Binay congratulated him and the generals for the Tuna Capital’s inclusion as one of the Top Medium-Sized Cities in the Philippines, according to the Competitiveness Cities Ranking Project 2007 of the Asian Institute of Management Policy Center.

GenSan, together with six other mid-sized cities were accorded the honors in a simple award ceremony at the Grand Ballroom of the Intercontinental Hotel in Makati on July 4, 2008.  Makati, likewise, was one of the topnotchers at the metrolitan cities category.

Here is the letter of Mayor Binay to Mayor Acharon: 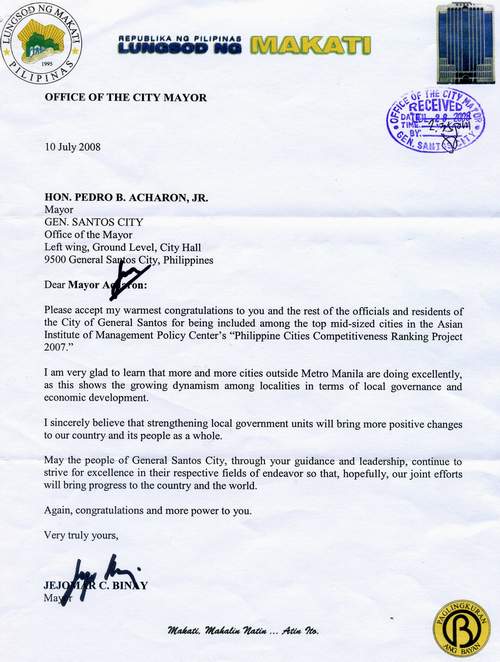 And here are the photos of Mayor Jun Acharon taken during the awarding and of the trophy which he received.  (Thanks to Christine Omar of Ateneo de Davao for emailing to me the first picture below.) 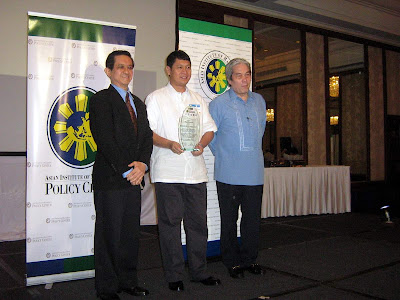 MOST COMPETITIVE MID-SIZED CITY AWARDEE. Gen. Santos City Mayor Pedro Acharon, Jr. is flanked by AIM Policy Center Executive Director Dr. Federico M. Macaranas and AIM President Francis Estrada after receiving the plaque from them recognizing General Santos City for “being One of the Most Competitive Medium Sized Cities in the Philippine cities Competitiveness Ranking Project 2007” during the awarding ceremonies at the Grand Ballroom of Intercontinental Hotel in Makati City on July 4, 2008. It is the 3rd award for the city in the same category having earned it earlier in 2000 and 2002. This recognition coincides with Mayor Acharon’s proclaiming the year 2008 as “YEAR OF EXCELLENCE” in the Tuna Capital. 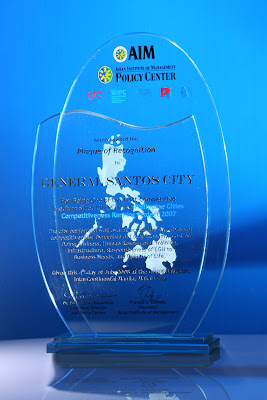 The Trophy from AIM Policy Center (photo by Leonard Pe)