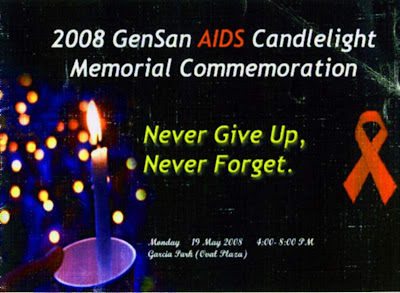 Late afternoon yesterday, May 19, 2008, I joined more than 500 other “generals” (as citizens of Gen. Santos call themselves) in mounting the 2008 GenSan Candlelight Memorial Commemoration in honor of the memory of those lives lost to HIV/AIDS and to those living with the disease.

Although it was not the Tuna Capital’s first time in joining the rest of the world in this simultaneous endeavor now on its 25th year, yesterday was made more significant with the participation of a very important personage in the fight against HIV/AIDS – Dr. Aye Aye Thwin, Chief of the Office of Health of USAID Philippines.

Dr. Thwin, who was invited by the local government of General Santos for the occasion to drumbeat its continuing support of HIV/AIDS programs, is of Burmese origins. During her speech before the crowd of volunteers at the Oval Plaza, she spoke eloquently of the need of countries to reach out to each other in their collective fight against this worldwide scourge. She also thanked City Mayor Jun Acharon and expressed her admiration for his administration’s relentless drive to educate and inform the locals about the disease.

After a response from Mayor Acharon and the ceremonial lighting of candles of virtues which he led, together with Congresswoman Darlene Custodio’s representative, Bebei Gonzales and Dr. Thwin, I then walked towards the center of the area fronting the stage. There, together with other like-minded individuals carrying lighted candles, we formed a human RED RIBBON, the international symbol for the fight against HIV/AIDS.

And while simultaneously singing along with Michael Jackson’s HEAL THE WORLD being played in the backgroud, we all raised our candles in the air, signifying our intentions to “NEVER GIVE UP, NEVER FORGET” to fight in this war versus a creeping silent killer in our midst.