When 32-year old Romeo Bartolome stepped off his plane after it landed at the old Buayan airport in General Santos City one morning in May 1993, he instantly liked what he saw.

“I was right away struck by the wide expanse of greenery right before my eyes and the clear unpolluted skies above, things which reminded me of my home in the US where I have relocated my family,” he recalls.

Rombar has flown to this southern city in Mindanao upon the invitation of his Kuya Efren who was the Chairman and President of their family-owned E.A. Bartolome Management Corporation.

The civil engineering graduate at the FEU was at that time working as stockroom clerk at the Signet Electronics Corporation in California juggling babysitting chores on their 3-year old son Rabmor with his doctor wife Aymie, who was working at Mayo Clinic as an Ob-Gyne.

“I migrated to the US after realizing that the hustle and bustle of traffic-wracked and polluted Manila was not a good place to raise my family. What used to be a one hour trip to my hometown in Bulacan now takes me three hours to maneuver,” he explains.

The Bartolome family was into manufacturing corn feeds through their Nutrimix Feeds Corporation plant in their hometown in Bulacan. With business booming, they needed to source out more suppliers. All-year round typhoon-free Gensan was the best logical choice to put up a buying station.

“Gensan for the family was the unknown wild frontier” Rombar says, adding: “My brother knew that, being the adventurous type, I easily fit the bill to head the operations there.”

Kuya Efren lost no time in flying to America to convince his younger brother to go back to the country enticing him with double of what he and his wife were earning collectively.

Romeo was hesitant, worried about his lack of knowledge on the corn feed trade. But it was something that his brother said that moved him to consider: “Lahat ng bagay, napag-aaralan. Everything can be learned.”

Besides, Kuya Efren reminded him, Rombar will be his own boss.

That was the “icing on the cake.”

The excited young man, upon settling here immediately buckled down to work, roaming the countryside, meeting farmers and establishing his headquarters at a rented warehouse near Makar wharf.

Knowing nobody here, he started expanding his network of friends from all walks of society, be it in the government, media, military or business sector.

One of them was Cesar Seranillo, a pioneer in the corn feed industry. Sensing the sincerity on the young man and his desire to learn, he started teaching him the ropes of the business. Not long after, Rombar became a competent semi-dry corn classifier and an astute trader.

Eventually, his family in the US joined him in their new home with wife Aymie shifting to being a full-time housekeeper.

As the years progressed, it became evident that Rombar was right about moving to Gensan. Corn supplies were abundant that on the average, he was shipping 12 wheeler-trucks worth of the crop weekly to Luzon.

In 1996, Malacanang allowed the importation of corn from other countries causing local prices to plummet.

As Rombar recalls it, “Then South Cotabato Governor Larry de Pedro asked me not to patronize the corn imports in order to help the farmers of South Cotabato.”

Heeding the governor’s call to support his suppliers, he did not stop buying from local farmers. This however affected the company’s profit margins and with the continued onslaught of the cheaper imports, his local purchases soon dwindled.

At around the same time, Rombar received a call from an excited Kuya Efren. He wanted him to immediately look for a lot where they can build a 100-room hotel. The family wants to enter into a franchise agreement with the Days Inn International.

“I was shocked, of course,” says Rombar while recalling that he asked his brother this question: “What do we know about running a hotel, much more a hotel with 100 rooms!?”

Thus, the frantic search for a suitable location began. In less than a week, they were able to purchase a 7,000 square-meter property along the National Highway right across the sprawling Gaisano Mall.

In less than two months, workers started constructing the foundation of the proposed four-storey hotel. Using pre-fabricated slabs, the latest U.S. technology marvel, the project was finished in less than a year.

Talks between Rombar’s family and the Days Inn soured however. Finally, the Bartolomes decided to handle the hotel themselves with their Gensan-based brother the obvious choice to head it.

On July 1, 1997, the 104-room East Asia Royale Hotel and Arcade finally opened with Romeo Bartolome at the helm. Under him were sixty five employees including senior managers to assist him. His number rule and maxim for them: Service with a Smile. 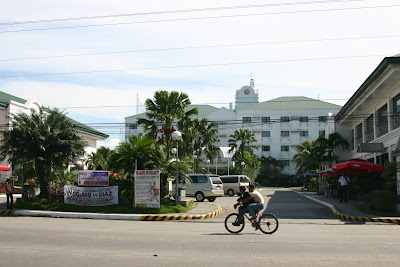 Being in the region for so long and having already learned the culture and lifestyles of its peoples, Rombar used this knowledge to his advantage in treating his local clientele and in conceptualizing promotional plans especially for his bars and tenants at the two-building arcade fronting the hotel.

He explains: “During the early 90s, the night life here was not that vibrant. Since Gensan is made up of an industrious working class, most of them would rather sleep after work than venture out at night. And because of the lack of better choices here, some would opt to travel to Davao for a good time. I wanted to change all that.”

Thus he initiated his first of a series of street parties and concerts featuring show bands and performing artists from Davao, Cebu and Manila revolutionizing General Santos City’s night life. 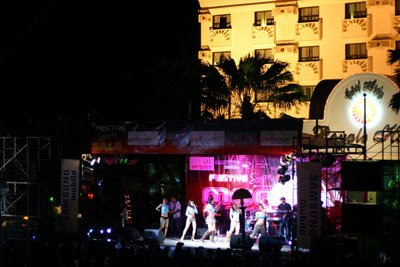 His wife Aymie also ventured into her own business by opening a franchise of Giacomino’s Pizza which she later acquired from the original owners.  This, plus taking care of her family which now includes Raphael and Roma aside from Rabmor kept her so busy too.   Currently, she operates a Medical Transcription Office as well.

Still, the young hotelier realized how volatile the hotel industry can be. A series of terror bomb attacks in the city and in nearby areas had immediate and direct repercussions on his business.

Rombar explains: “Hotels are the first casualties of any of these dastardly occurrences. As soon as news about a bomb or skirmish is leaked out on the evening news, then the ensuing cancellations of room reservations from our clients follow.”

Eventually, he changed tack and concentrated on the local regional market by pushing his hotel’s full service function rooms and restaurants while still occasionally churning out the street parties and events it was known for.

This ploy eventually worked. The hotel soon became the region’s choice venue for small and large gatherings. His catering services barely rest due to numerous functions. Ultimately, local bookings more than made up for any weakness in the entry of inbound tourists.

Now on its 11th year and the city’s constituents more secured with the local government’s vigilant efforts to maintain a healthy climate of peace and order, Romeo Bartolome still shows no sign of stopping.

Right now, he has plans of building an extension at the corner lot adjacent to his hotel to house bigger halls for large conventions, an indoor swimming pool and another shopping arcade with a bigger parking space for planned bigger street parties.

Rombar clarifies this, thus, “I still have grand dreams for Gen. Santos. Right now, big economic players are starting to come in, showing interest in our dynamic economy propelled by a growing able workforce.”

He adds: “East Asia Royale Hotel was at the right place at the right time when it opened here. Now with even better things to come for Gensan, we sure don’t want to miss the ride.”

For hotel bookings and other inquiries, check out East Asia Royale Hotel’s website at http://www.eastasiaroyalehotel.com.  Or visit them at National Highway, Gen. Santos City, Philippines or call them at Telephone #s +63-83-553-4119 to 28.  You may also email them at gensan@eastasiaroyalhotel.com.