I have been to Tuka Beach once before in 2006, a trip I enjoyed so much that when my brother invited the whole family for a weekend there again, I was the first to say “yes”!

Tuka Beach in the municipality of Kiamba, Sarangani Province is actually the name given to a protected marine park consisting of four coves christened as Tuka 1, 2, 3 and 4.

Currently, only the first three coves are open to the public while the last one is off-limits.

On the day of what my nieces called the TUKA MARINE PARK ADVENTURE, we left Gen. Santos before 7:00 AM since staying overnite was not part of our plans and we wanted to come back home to the city before 6:00 PM.

There were 11 of us inside my brother’s INNOVA which made for a very noisy although merry ride to the municipality of Kiamba, 87 kilometers west of the Tuna Capital, along the shores of Sarangani Bay.

We arrived Kiamba an hour and a half later and proceeded straight to the wharf where Mrs. Dayday Falgui, wife of the Mayor, Rommel, a friend of my brother from way back was waiting for us. 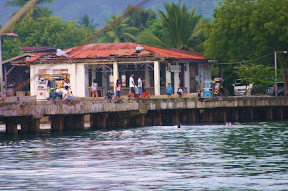 Since Tuka is only reachable by sea, she directed us to a 20-foot long fishing boat which will take us there. But since it was low tide and the boat couldn’t get near the wharf, some of us had to be ferried by a smaller banca to the boat itself.

The rest (like me) waded in waist-deep water instead. 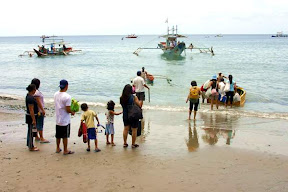 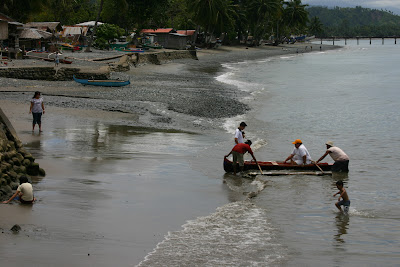 My huge brother Orman trying to fit into the 6-foot long banca which will take him to the fishing boat, our transport vessel to Tuka. Obviously, nobody wanted to ride with him.
Since my siblings and I were of the extra large variety, we had a hard time going up the boat and if not for the strong arms of the boatmen who helped us by pushing our heavy asses upwards, we would have fallen into the cold water below. Eventually, all were us were seated comfortably in the middle part of the vessel. 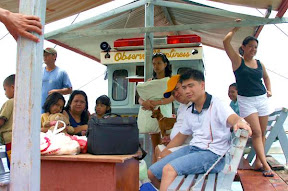 In no time at all, we were sailing our way to Tuka, past other fishing boats which berthed for the day, past small communities along the shores of Kiamba, and past majestic views of the rolling hills of Sarangani in the not too distant horizon. 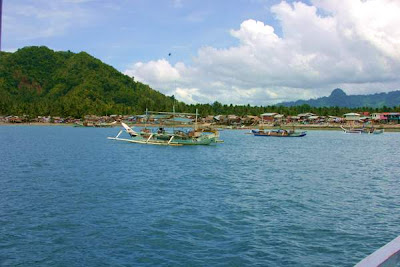 We soon passed by Tuka 1 and Tuka 2 which all seem deserted and eventually, the sight of Tuka 3 was now before us. 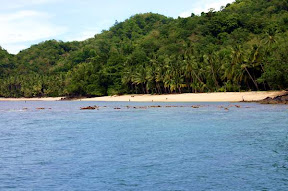