The Fat and Fab Brothers Bariles and Orman (or Ganda Ever in the blogosphere) woke up early before 7am at their room at the Hard Rock Hotel at Resorts World Sentosa.  It was still dark outside their window, much like how it looks in the Philippines at 5am but the view of the world outside pointed to an already busy nation.

It was to be the first day of the conference proper of the Asia-Pacific Google Geo Users Summit where they were participants along with 7 other Filipinos. Still drowsy, still they had to be at the STARZ Restaurant at the lobby of their hotel for breakfast before 8am and so, they immediately showered, one fat sleepy man after the other.

Starz Restaurant was already teeming with people of all ages and nationality!  A long table on the left side offered all the imaginable breakfast you can eat!  There was Western, Malay, Chinese, Indian and Japanese breakfast fare for just about everyone! Bariles was on a diet and so to solve his predicament, took and ate a little of everything.  He most especially liked the Indian wrap called pita which he dipped in two kinds curry-like sauce.  Lovely! While eating, a Summit participant approached him and asked permission to have his picture taken with him.  He liked the shirt that Bariles was wearing which bore the words: YouTube MySpace and I’ll Google Your Yahoo.  All throughout the day, strangers stopped on their tracks to praise him for his shirt and  ask where he bought it. After breakfast, the brothers and some Pinoys who shared their table like Allan Paolo Medrano, Chamba Kayman and Lakan Bautista immediately went down for the summit proper at the Resorts World Sentosa Convention Centre. 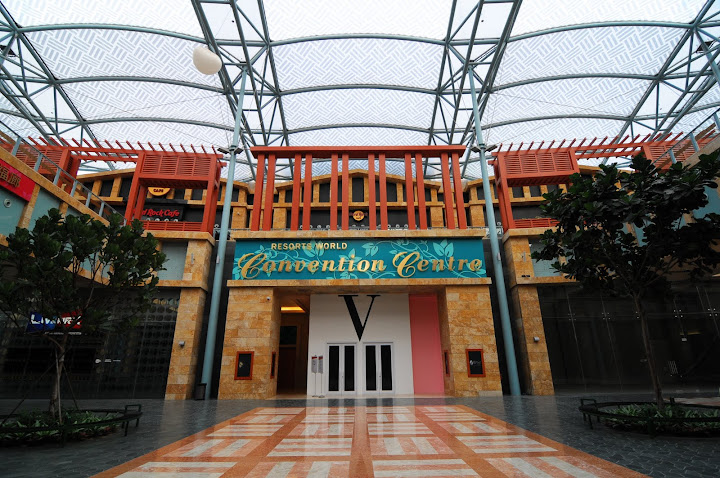 There, they and the other members of Team Philippines settled near each other as Day 1 of the Google Geo-User Summit unfolded. 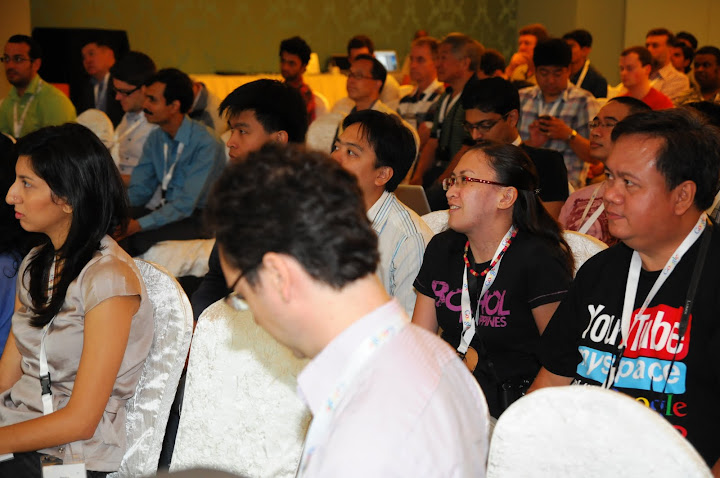 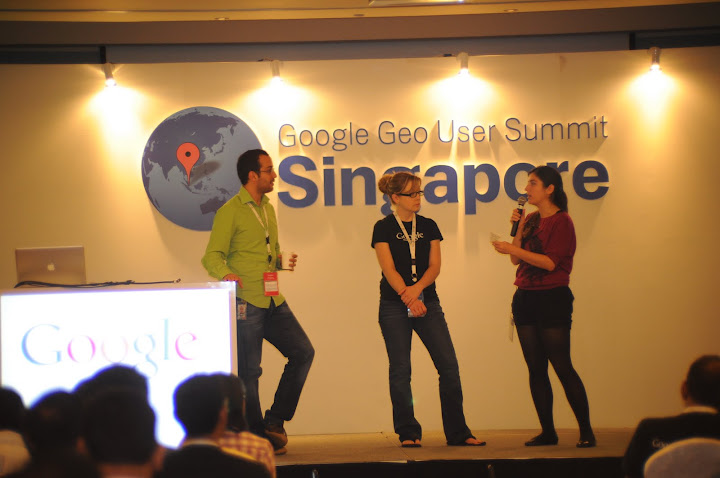 Google Geo Big Boss James Therrein was next.  He explained to everyone why Asia is so important to Google – it is the largest growing area in the world in terms of internet use and usage of their products (not just in the major countries like Japan, Korea and China).  From him, the brothers found out their web browser Google Chrome is now number #1 in the Philippines! 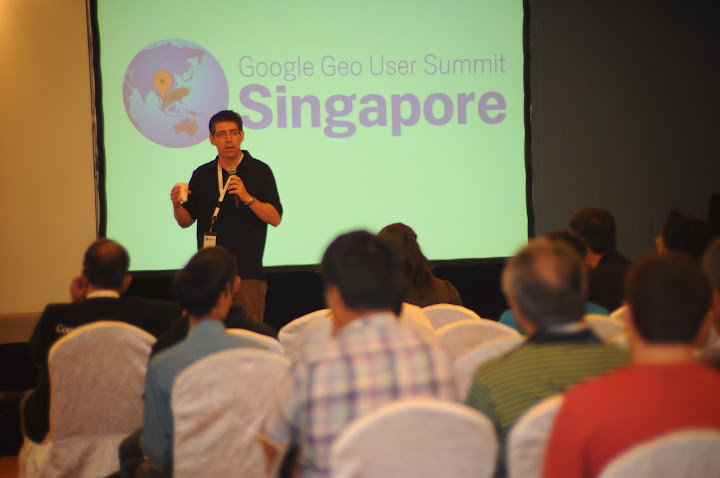 Although Asia still trails the Western hemisphere in terms of infrastructure, MOBILE will change the world in Asia, he continued. Mobile and location service are very important and critical in Asia, he explained. 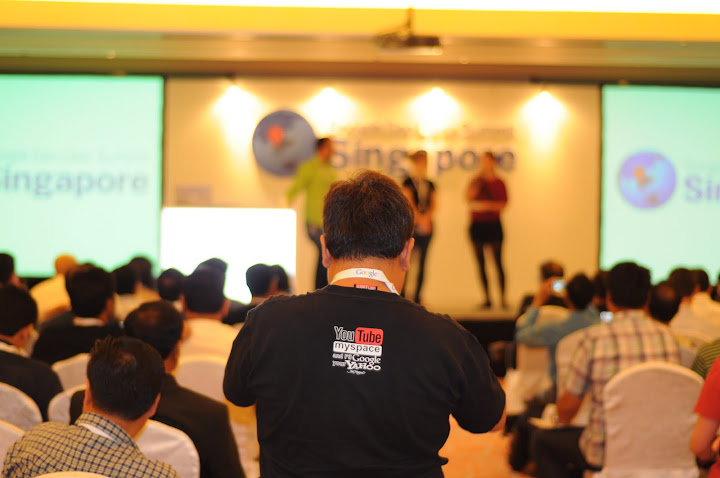 The first Keynote Speaker was Ed Parsons, a GeoSpatial Technologist who is a Google Geo Evangelist.  He regaled the summit participants with the interesting history of Google and how the company envisions to “organize the world’s infomation and make it universally accessible and useful”.

He also divulged that 30-40% of Google Searches including on laptops, desktops or mobile gadgets, are all looking for directions to or information about various PLACEs in the globe, hence the need to update and tag the world’s maps. 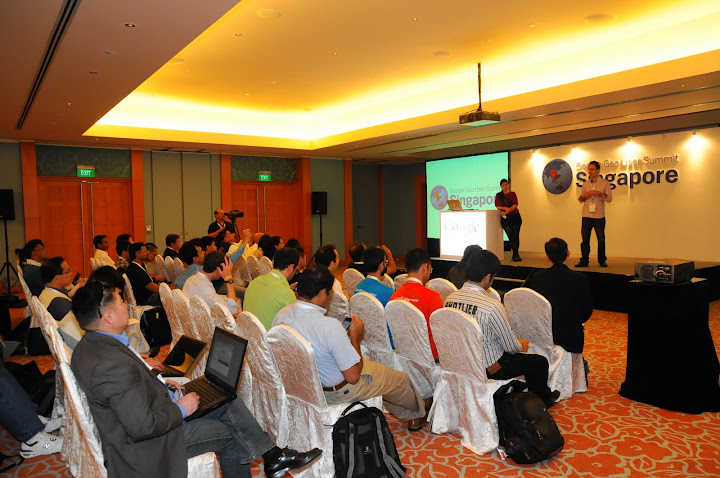 Right now, Google Maps have 100 million users including Application Sites and has more than a hundred thousand developers (map makers, among them).  From him, the attendees also found out that right now, there are “35 billion gadgets and devices connected to the Internet at any given time”.

So much information load-up that the brothers and all the participants were already hungry when a break was called for the most important meal of the day!

Lunch time was in an adjoining room which had separate buffets for halal and non-halal food.  There was so much to eat that Bariles and Orman tried a little of everything! 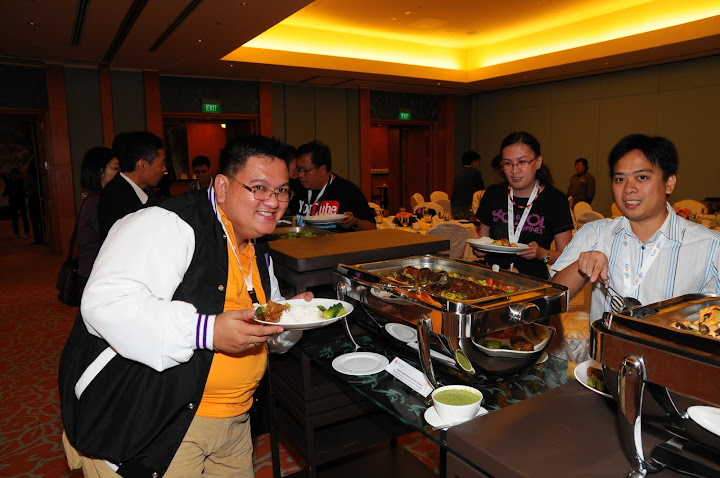 Of course, the Team Philippines all seated themselves together and was one noisy and happy bunch. The first part of the afternoon sessions were reserved for NGO’s, government workers and educators who were tasked to share their experiences with Google Maps.

Up first was Orman’s new friend, US State Department’s Lucas Keene who looks like Hollywood actor James Franco.  He works under the Office of the Geographer in Washington tasked with two divisions.  These are the Office of the Humanitarian Information Unit which is assigned to produce unclassified maps on complex humanitarian emergencies for the US government, international community and the public. 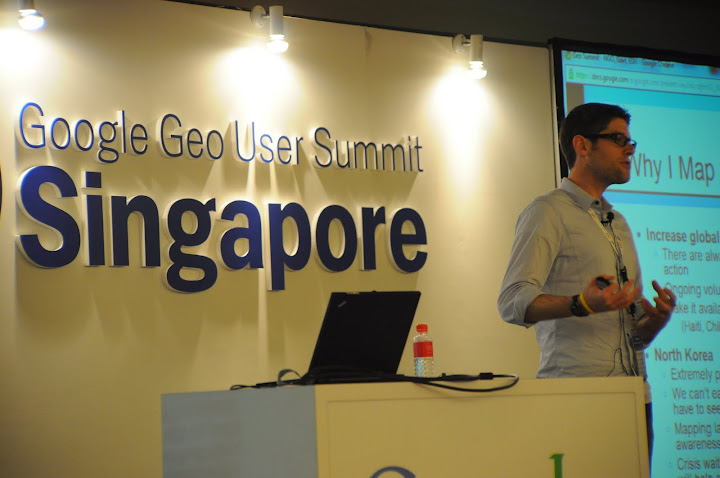 The other division is the Geographic Information Unit whose tasks are: to provide mapping support to the Department of State; serve as USG advisor on sovereignty issues and is the USG authority on international boundaries.

All these of course with the use of Google Map Maker, Panoramio, Google Earth and Google Maps.

He related how thru Map Maker, they were able to assist Pakistan in January 4, 2010 during the Attabad Landslide Lake; how USAID is uses it in their humanitarian works in Libya and other countries needing humanitarian emergencies.

Next Presentor was Saysana Phanalasy a young woman from PSi Laos, a leading non-profit social marketing organization tasked to reduce spread of HIV/AIDS, STIs and malaria in the country.  Since 2010, it has joined the Google Mapping Project led by a certain Bram Pilot to map out the health clinics they work with in the region. 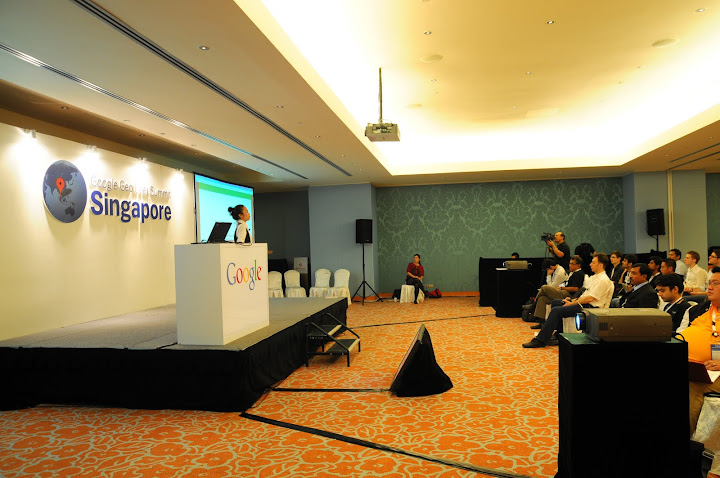 Aileen first neatly summarized how the Pinoy mappers have been using the mapping technology when disasters struck the Philippines in 2010, during the National Elections on the same year and how they started organizing mapping parties from Luzon to the island of Mindanao. 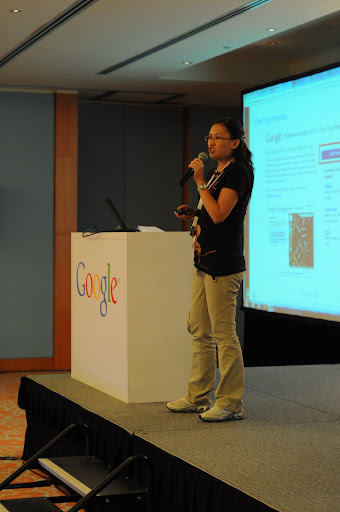 Bariles’ presentation was about the Google Mapping and Precinct Mapping Parties that his group of the Soccsksargen Bloggers initiated in General Santos city and their future plans of espousing the use of MapMaker among their citizens. Lastly,  it was FEU-FERN Dean Lakan Bautista turn to present further how they developed a landing page for those areas in Luzon affected by typhoon Ondoy and how his univesity is looking into incorporating Mapping into their curriculum. 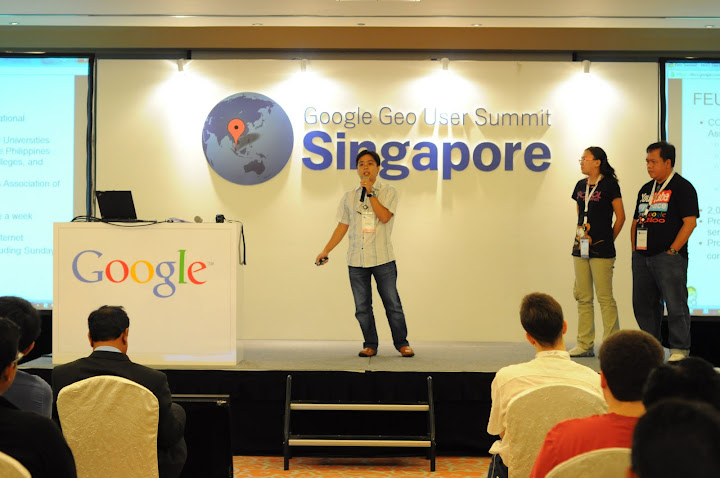 The sessions proceeded with Mapper Stories from participants from India, Pakistan, and Kazakhstan who all related stories of how mapping started in their respective localities and went on to become a valuable tool in relief and disaster operations, for one and in tourism promotion in other aspects. 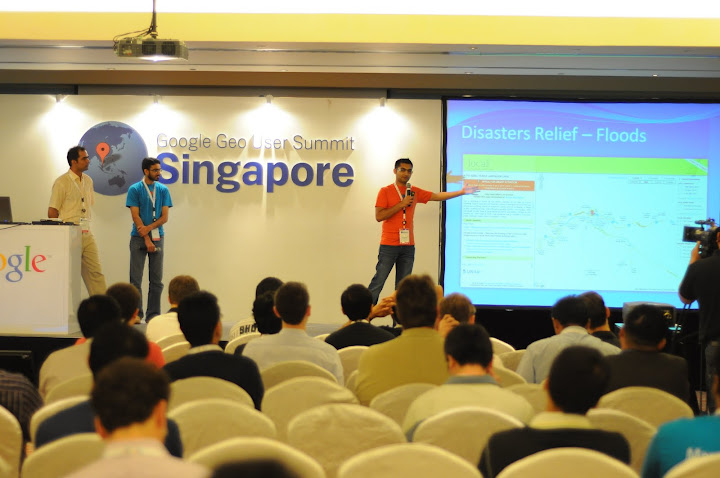 The exciting afternoon sessions then ended with a presentation from the members of the Google Map Making Community themselves who updated the participants on their activities and plans to further strengthen the use of map maker among its advocates.  They also discussed solutions to the different concerns thrown in by the participants re Map Maker. 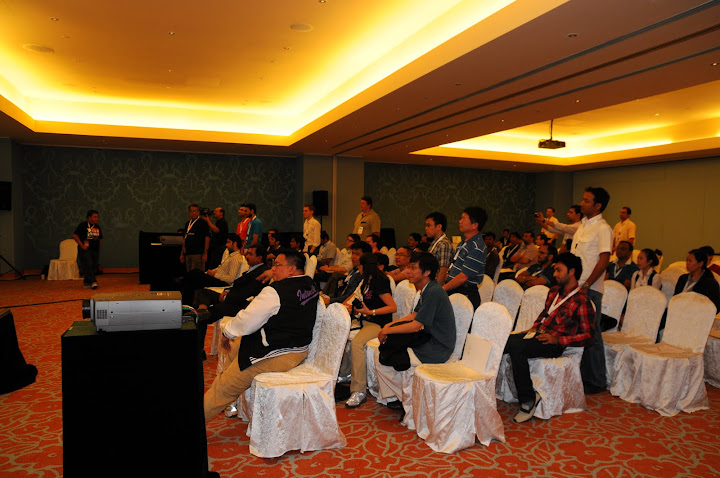 Bariles was also videotaped describing his participation in the summit and relating his involvement in the world of Google Geo Users. 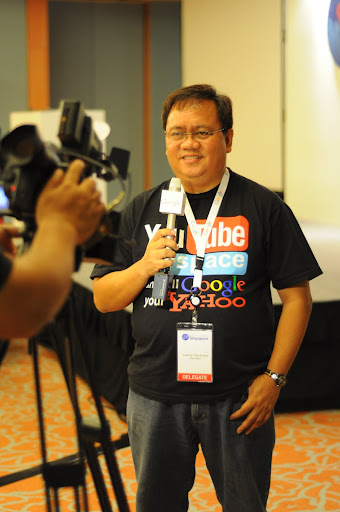 Capping off Day 1 of the Geo Community Summit was a fun visit to the Google Headquarters in downtown Singapore. 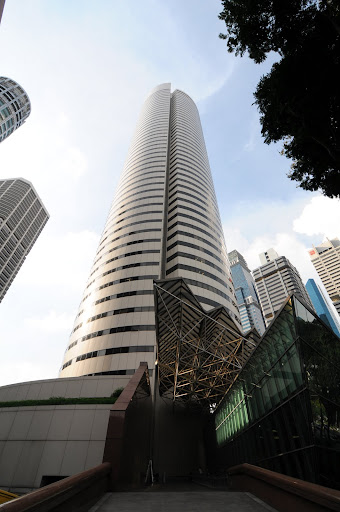 There,  the participants had an enjoyable time checking out the offices of Google Singapore, their cafeterias and the seemingly inexhaustible free food provided for their staff. All in all, it was such an excellent way to conclude a definitely awesome day for Bariles and GandaEver in Singapore who have vowed to step up their drive to nurture more Google Geo Mappers in their ranks, whether as members or not of the Soccsksargen Bloggers back home in General Santos City. Watch out for the 3rd and Final blog post on their Google Geo Users Summit participation plus their visit to the Universal Studios at Sentosa island.  Soon!

Bariles would like to thank the following for making his trip to Singapore possible:  GenSan City Mayor Darlene Antonino-Custodio, Wilma Villanueva, Orman Manansala, Aileen Apolo, George S., Patrice S., Connie D. and some other generous souls who would not want to be named.  May God bless you for your generosity!  Terimah kaseh to Google Geo Users Summit for most of the photos above.