According to a report from Philboxing.com:

Pacquiao initially found the Thai a bit of a puzzle, but after making the necessary adjustments scored the first knockdown in the sixth stanza before stamping the coup de grace with a beautiful left in the eighth round to finally halt the visiting fighter at the 2:27 mark of the round.

Promoter Rex ‘Wakee’ Salud, who put up the show with superstar Manny Pacquiao’s MP Promotions, said that Bobby Pacquiao is now slated to defend his new title sometime in October or November in Dubai, UAE.

Dionesia Pacquiao, who was at ringside praying the rosary while shouting instructions to his son, was ecstatic over Bobby’s win.

“I am very happy he won this WBO title. This means so much to his career. I thank the Lord for this win,” the Pacquiao matriarch told the media after the fight.

Bobby arrived this morning with mother Dionisia via PAL Express from Cebu at the GenSan International Airport where he was met by a welcome contingent from the City Mayor’s Office. From there, he was whisked to Grab-A-Crab Restaurant where Mayor Jun Acharon tendered a lunch for him and his entourage. 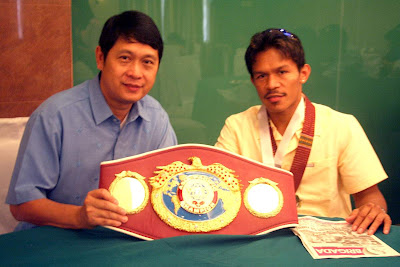 Mayor Jun Acharon and new WBO Asia-Pacific Lightweight Champ Bobby Pacquaio show off the new title belt won by the latter during the lunch tendered for him by the mayor at Grab-A-Crab Restaurant after he arrived from Cebu on August 4, 2008